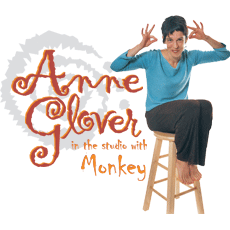 CD – In the Studio with Monkey

"Your stuff is wonderful! I've now heard the CD at least a half dozen times. My little granddaughter has been in town and is spending time with us. We put it on in the car and she listens raptly. She is hoping she can meet Monkey some day."

"Anne, Not only is everyone around here hooked on this CD, but the children are hoping you will get so fed up with Monkey that we will be able to adopt her. They are debating whose room she should sleep in. Just thought you might like to know."

"It is not surprising that Anne Glover's new CD, In the Studio with Monkey grabs and holds the attention of children. Glover has been performing full-time to young audiences for 15 years, and she is a master of her craft. But the levels of humour that unfold on repeat listenings also captivate adults. Glover adapts a selection of humourous folktales from around the world, which she tells in her inimitable, well-polished style.

Anne has an uncanny ability to switch voices and personalities mid-breath, and to use her characters to quietly portray the comedy and the pathos of the human condition. The stories are embellished by brilliant musical moments by co-producer Adrian Dolan. Interspersed between the major stories are a series of dialogues between Anne and "Monkey", who contributes everything from botched translations to complaints about the rules in the studio. Of course, Monkey has to have the last word, and she insists it should be a "bad word"... Happily, the adults will not mind when the kids insist (and they will) on listening to In the Studio with Monkey yet again."

Save this product for later