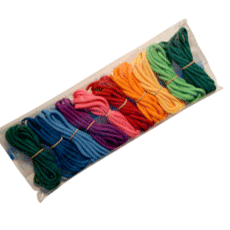 Do you want to do string figures? That's why I made my DVD, How to Make the Dog… and Other Favorite String Tricks. I made it just for you!! It starts with simple shapes you can do right away, and works up to the more complex forms, like the turtle and the dog.

Learning the little dog will take some time and a fair dose of patience, but hang in there! Once you know it, you'll be able to impress anyone! You can even use it to distract your parents when your report card isn't what they'd hoped it would be! (The dog is also in two of the books listed below: Super String Games and Fascinating String Figures.)

Get started now - download Anne's "Simple Strings" pdf! You'll learn Opening A, Tree, a leg catch from the Kwakiutl of Vancouver Island, Pizza, Pyramid, and Star! (Be patient - it will take a few moments for this file to download.)

Also check out the International String Figures Association (no kidding!) Their website (www.isfa.org) is full of pictures of some wonderful string figures, as well as information on the history and culture of string figures around the world.

And don't forget about books! Here are some of my favourites:

Save this product for later